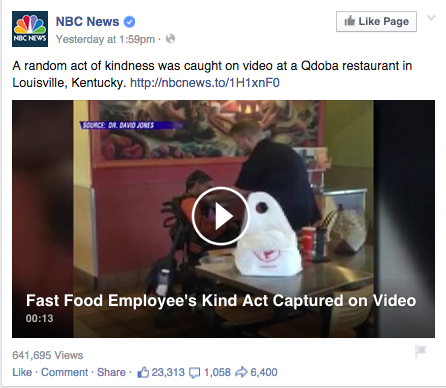 When I’m trying to find out what’s going on in the world, I usually do what 88 percent of Millennials do — log on to Facebook and Twitter and see what people are talking about. As I was scrolling through my Facebook News Feed to try to find something that caught my eye, I came across a really heartfelt post from NBC News about a Qdoba Mexican Grill employee who took time out to perform a random act of kindness. He helped a woman through the line, sat her in the lobby, got her a drink and then helped her eat. This long-time Qdoba customer is wheelchair bound, and if not for this man’s help, she would’ve had a very tough time eating.  “I mean, she needs help, and if I wasn’t going to do it, no one was. Who else is going to do it?” said the employee. Once the restaurant’s manager saw his employee’s good deed, he knew he had to record it and share it with his friends. He obviously had no idea that it was going to go viral.

With all the sensationalism out there from both national and local news outlets about shootings, robberies and social injustice, it’s refreshing to comes across a story that gives me a little more faith in humanity. More than anything, this piece of content is trying to engage users and prompt them to have an emotional experience. I love that NBC News included the video right in its Facebook post so that users could watch the clip right then and there without having to be redirected to NBC’s site. And best of all, the clip is 13 seconds–not too short and not too long, in my opinion. However, if you’re interested in hearing more about this story, you can click on the link included in the Facebook post, which will redirect you to NBC’s site where you can watch a longer, more detailed video that explains the backstory and the employee’s reasoning for choosing to help this woman. This story is very visual, so I think that those news outlets that opted not to display the video in their post missed the mark. Despite the fact that the story was short, sweet and to-the-point, I was still able to find a story arch that included the set-up, the backstory of the woman; the problem, the fact that she needed help eating her food; and finally, the resolution, the Qdoba man actually feeding the woman. While I would’ve liked to have seen a short written piece of content accompanying this story, I thought this video was great social content because it showed a more accurate representation of the kind of everyday acts that are taking place in our society.